Race to the Bottom: Forbes Top 25 Oil and Gas Companies 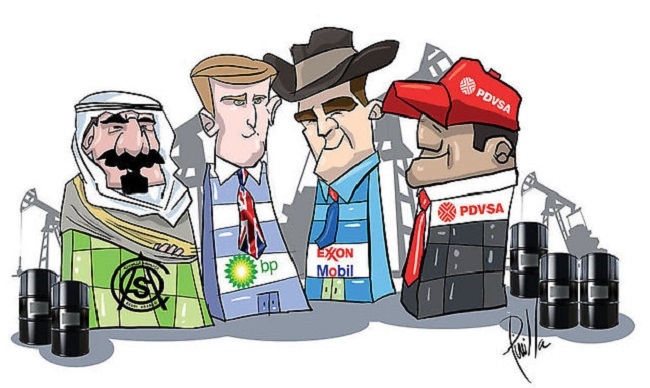 Every year, Forbes magazine publishes an annual ranking of the 2000 biggest companies in the world based on four metrics: revenue, profits, assets, and market value.

The majority of companies (500+) were from the USA, while Chinese companies occupied the top three places.

Oil and gas companies maintained their top places in the rating, despite a tumultuous year of oil prices and mass layoffs and bankruptcies in the energy industry in 2015.

ExxonMobil kept its title of largest oil and gas company worldwide. However, in April 2016, the energy giant lost its coveted AAA credit rating for the first time since the Great Depression due to the effects of low oil prices. This year, it slipped to 9th place in the Forbes 2000 ranking.

ExxonMobil held one of the top three spots since the poll was introduced in 1955 until at first sparring with General Motors and then later Wal-Mart for the top place. The last year that the Irving, Texas-based company was the biggest company was in 2012.

Despite the slowdown in the Chinese economy, the largest global corporations were Chinese banks: Industrial and Commercial Bank of China (ICBC), China Construction Bank, and Agricultural Bank of China, which have held the top three positions since 2014. Bank of China slipped to 6th on the list to 4th place, which it ceded to Warren Buffet’s Berkshire Hathaway, followed by American banks JPMorgan Chase in 5th and Wells Fargo in 7th. Apple secured 8th place, while Japan’s Toyota Motors held onto its 10th place position to break up the America-Chinese domination.

While Chinese and American banks topped this years’ list, oil and gas companies retreated in their ratings.

After ExxonMobil in 9th place, the next energy company was PetroChina (the second largest oil and gas company in the world) in 17th place, and US company Chevron in 28th place, dropping 12 spots since last year.

The list shows that both private and state-owned energy companies are feeling the burn from the oversupply in the world market in the last year. Private companies have been forced to delay projects as well as lay off thousands of staff, while state-owned companies in the so-called petrostates – those whose economy depends on the sale of hydrocarbons- also lost their leadings positions in the global economy.

As for Russian companies, Gazprom can be found in the 53rd spot, having dropped 26 positions, and Rosneft is in 75th place, having fallen 16 spots.

One oil and gas company that is notably absent from the top of the list is BP, which currently occupies the 370th place on the list. The spectacular drop is due to the massive fines the company paid following the Deepwater Horizon oil spill in 2010. In order to pay out more than $20 billion in a settlement, the company began to actively sell assets and cut spending.

Despite the downward trend in global oil prices, the oil and gas sector is still recording huge projects. Combined, the world’s top 25 oil and gas companies sold more than $2.6 trillion in products, and income revenues were $81 billion.