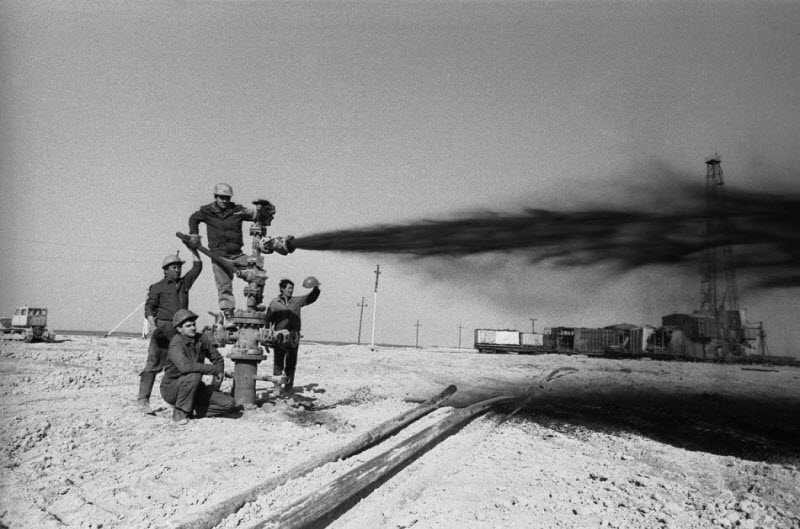 Kazakhstan’s largest oil project Kashagan, scheduled to come online three years ago, still hasn’t produced a single barrel of oil. Now officials say production will begin in October, with the potential to double the country’s oil output. A successful launch could turn around the nation’s economy, another failure would be the latest blow to the slowing oil industry.

The world’s tenth largest country by land mass, Kazakhstan is a land of contradictions: snow-capped mountains that stretch to China, arid steppe where only horses and their herders roam, oil-rich, yet less than a fourth of the population own a car that runs on the oil extracted from the ground.

After Russia, Kazakhstan is home to the largest volume of liquid hydrocarbons in the former Soviet Union. According to Kazakhstan’s energy ministry, prove oil and gas condensate reserves total nearly 39.8 billion barrels (about 5.3 billion tons).

Oil production has tripled since Kazakhstan achieved independence from the Soviet Union in 1991, and since 2010, Kazakhstan has been producing around 80 million tons of oil per year. This helped the Central Asian country to become the world’s 18th largest oil producer, behind Algeria but ahead of Colombia.

Kazakhstan ships its crude to neighboring Russia and China, as well as to the Netherlands, France, and Italy. However, the country is not yet self-sufficient, and doesn’t produce enough to cover domestic market demand for oil products.

While Kazakhstan has no dearth of extractable hydrocarbons, its aging and depleting fields threaten a dramatic drop in production.

Standing alone, 1.56 million barrels per day is an impressive figure, but with proven oil reserves nearly as large as the U.S. – it is less so. In comparison, the US produces 8.68 million bpd, and Russia 10.6 million bpd.

Waiting for a Kashagan Miracle

Astana is placing its hopes to increase production Kashagan, the second largest field in the world with recoverable reserves estimated at 10-13 billion barrels, and over one trillion cubic meters of natural gas reserves.

Located 80 kilometers off the coast of Kazakhstan in the Caspian Sea, ground was broken on the Kashagan project more than 15 years ago with the expectation it would produce at least 90,000 barrels per day. So far it produces zero.

At more than 2.5 miles below the seabed under very high pressure (770 pounds per square inch), the oil isn’t easily accessible, and presents a magnitude of complicated engineering challenges.

The field has the potential to produce more than 58 million barrels of oil per year, which would more than double the country’s crude production, making it a top 10 global oil exporting nation.

The sheer potential attracted an array of foreign oil giants: Italy’s Eni, Royal Dutch Shell, Total, ExxonMobil (16.8% share each) Japan’s Inpex (7.6%), and China’s CNPC (8.4%). ConocoPhillips sold its 8.33% stake to KMG for $5.4bn in 2013, which in turn sold it to China’s CNPC. Kazakhstan holds a 16.81% stake in the project through KazMunayGas and the national sovereign wealth fund Samruk-Kazyna. In total, more than $50 billion has been invested into the project, compared to the original estimated cost of $10 billion.

The cold climate freezes the shallow water in the winter season, which makes conventional drilling practices impossible. To add to that, the reservoir contains a highly toxic, corrosive hydrogen sulfide.

After more than eight years in delays, drilling finally began on September 11, 2013. Production was halted 13 days later, after cracked pipelines that running to the onshore caused a gas leak. After a leak on the gas pipeline running to the Bolashak onshore processing facility. The Kazakh government has said that produced will start again this October.

For the last three years, Kazakhstan has been missing out on billions in oil revenue.

Other oil fields in Kazakhstan are unable to make up for the lost oil production at Kashagan.

Out of the 15 sedimentary basins on the Kazakh territory, only 5 are used for commercial purposes. The two biggest oil and gas fields, Tengiz and Karachaganak (with an estimated 1.35 trillion cubic meters of gas and 1.2 billion tons of oil and liquid condensates) account for about half of the country’s oil production. Discovered in 1979, these two fields have been developed by western investors over the last 20 years. But as the fields’ resources dry up, it becomes more expensive to extract the remaining crude from the ground.

Post-Soviet discoveries such as Kumkol North and South are estimated to collectively hold 300 million barrels of proven oil reserves, however, Wood Mackenzie believes that production at these fields reach will their peak of 72,500 bpd in 2017.

The Zhambyl field, which is located in the northern section of the Caspian Sea, is estimated to contain more than 880 million barrels of oil.

Kazakhstan first discovered oil in 1988, first producing the product as an independent nation, then under the Soviet Union, and now again in its own right. With over 30 billion barrels of recoverable crude, it’s unlikely the current Kashagan problem and production rut will spoil long-term prospects.

Wealth from energy has significantly boosted the country’s economy under the leadership of President Nursultan Nazarbayev, who has ruled the country with an authoritative, yet benevolent, manner since independence (last 25 years).

Energy drives the economy of the landlocked Central Asian country: oil alone accounts for 25% of GDP.

Situated between Russia and China, Kazakhstan is geographically surrounded by economic crisis. The recession in Russia, which really only began to fully manifest itself when oil prices began to slide in the second half of 2014, quickly spilled over to Kazakhstan as the two economies are closely linked. To the south of Kazakhstan is Uzbekistan, Kyrgyzstan, and Turkmenistan, all reeling from Russia’s rupture.

GDP, which only expanded 1.2 percent after 6 percent growth in 2013 and 4.1 percent in 2014. The spillover recession from Russia has also battered foreign investment to Astana by nearly half.