The Caspian Sea: Where Russian, Iranian, EU, and US Gas Interests Collide

The Trans-Caspian pipeline project is still showing some signs of life. Earlier this year, European Commission Vice President Maros Sefcovic paid a visit to the capital of Turkmenistan, Ashgabat. The native Slovak, who is in charge of the Commission’s Energy Union, said that the EU will start receiving Turkmen gas in 2019. The move comes as Europe continues reduce its Russian gas purchases in a snub to Moscow’s actions in Crimea and eastern Ukraine.

Home to the world’s fourth-largest reserves of natural gas, Turkmenistan has the potential to become one of Europe’s main suppliers via Turkey.

In 2015, the landlocked ex-Soviet states plans to increase gas production to 83.3 billion cubic meters (bcm) per year, and boost exports to 48 billion cubic meters of gas compared to the estimated 45.1 bcm of gas in 2014. China currently gulps up about 30 bcm, and Russia roughly 11 bcm, and Iran is the third largest importer of Turkmen gas.

Controversial From the Start

If it is to be built, the pipeline will deliver Turkmen gas under the Caspian see to Azerbaijan, where it will be transported through Georgia and Turkey to the EU. The project, first proposed in 1996, has gone nowhere, as Caspian Sea powerhouse border countries Russia and Iran prohibit any development. 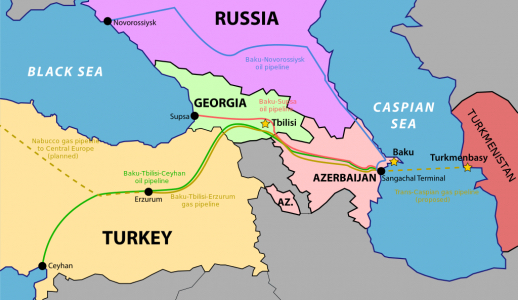 Sluggish progress on the pipeline may be warranted, as many critics believe the project could be a financial and political mess. A project aimed at ousting Russia from the EU market will not receive a warm welcome from the Kremlin. A major proponent of the project, the US, has no obvious upstream stakes in the project, which has also drawn skepticism.

But who is going to front the $5 billion to build the 300-kilometer pipeline that could trigger a regional conflict? If the project isn’t built with Russia’s blessing, Moscow has the military capability to shut it down.

Russia has established energy ties with Turkey by promising them a version of the South Stream, but Turkey is simultaneously developing relations with Turkmenistan, and in 2014 agreed on increasing natural gas to Turkey, but left details on the actual route murky, as not to rile neighboring Russia.

There are serious doubts whether the project is even meant to come to fruition, or is simply just rhetoric to stir up relations with Russia and its Caspian neighbors.

Russia strongly opposes the project, as currently Gazprom, the world’s largest producer of natural gas, buys gas from Turkmenistan on the cheap and either sells it within Russia or abroad for profit. Russia

The energy relationship between Gazprom and Turkmenistan is shaky at best. On Friday, July 24, Russia’s Gazprom launched a formal case against Turkmenistan’s Turkmengaz at the international arbitration court in Stockholm over supply contract pricing.

A Black Hole of Water

Iran and Russia, which enjoyed exclusive access to the Caspian Sea until the fall of the USSR, continue to undermine progress by raising either environmental concerns (though many doubt their sincerity for nature) or legal disputes over Caspian maritime boundaries. Since no current agreement exists on the jurisdiction of the bottom of the Caspian Sea, no pipes can be laid without consensus from all five members.

Since the collapse of the Soviet Union, each individual country has put forth its own vision on how to divide the waters, each of course, in their own favor. But for now, in terms of international law, the Caspian Sea is a sort of black hole.

Russia, Azerbaijan, Iran, Kazakhstan and Turkmenistan are oil-rich. Leaders from the five nations meet annually at the ‘Caspian Summit’, which has only brought about bilateral accords, and no general consensus of the shores.