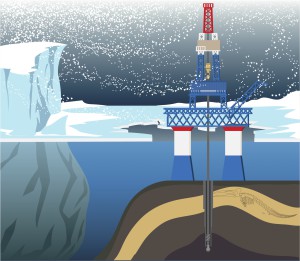 The Arctic Circle is estimated to be home to 30% of the world’s undiscovered gas reserves and 13% of oil, according to the US Geological Survey. About one third of the total reserves is located in Russian waters, and by 2050 the new cold frontier will provide 20 to 30 percent of total Russian oil production.

So far the only Russian companies that have licenses to even explore the Russian Arctic Shelf are state behemoths Gazprom and Rosneft, which reportedly paid huge cash sums for exclusion extraction rights back in June 2013.

“The Russian Arctic Shelf is a major source of raw materials for hydrocarbon production in the long term,” Igor Sechin, head of state-owned Rosneft, said at the St. Petersburg Economic Forum in June.

Rosneft is jointly working with US ExxonMobil, Italy’s multinational Eni, and Norway’s state-owned Statoil in the Kara Sea. In September of 2014, just weeks before sanctions took hold, Rosneft and partners first discovered a major source of oil at the “University 1” well, in the East-Prinovozemelsky 1 block.

No second well was drilled, due to sanctions imposed by the US and Europe over the Ukraine debacle. Foreign partners were forced to withdraw from the project. Russia’s Energy Ministry expects exploration to continue no sooner than 2016, and Alfa Bank analyst Alexander Kornilov says 2020 at the earliest.

Rosneft will postpone at least 10 sites, as well as reduce exploration by 95 percent, a source from Russia’s  Federal Agency on Mineral Resources told Interfax on Monday.

Sanctions technically bar the US and EU from exporting equipment and services needed to extract oil and gas from the Arctic. Rosneft is unlikely to find a partner that would agree to similar terms that ExxonMobil did, according to Kornilov. Even if sanctions were magically lifted, oil would have to advance to more than $80 per barrel for the operation to be profitable, said Kornilov.

Rosneft has already invested 33.3 trillion rubles (about $600 billion) in the Russian continental shelf, mostly by taking out debt, equity, and investments from partners.

ExxonMobil has said it may lose $1 billion if it isn’t allowed to continue work with Rosneft.

338 billion cubic meters of gas (bcm) and over 100 million tons of oil now lay restive beneath the ice, both due to sanctions and the climbing price of oil, which makes deep sea drilling too costly. According to Rosneft, the oil that is located the province could rival the total current reserves of Saudi Arabia.