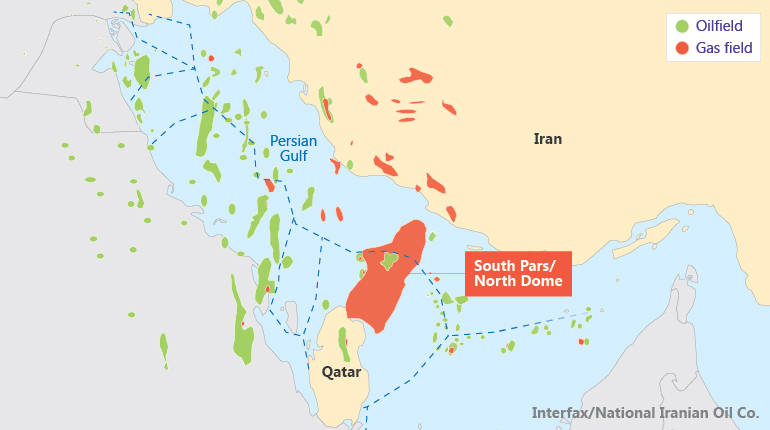 Tehran has announced that gas production at South Pars, the country’s and world’s largest gas field, has doubled in the last four years, and  the launch of five new gas platforms has put Iran in reach of surpassing neighboring Qatar’s gas production capacity level.

Iranian President Hassan Rohani, who is up for re-election next month, delivered the good news in April.

According to a statement by the National Iranian Gas Company (NIGC), with the start-up of the five gas platforms has put Iran’s gas production capacity level on par with neighboring Qatar.

The inauguration of South Pars phases 17 through 21 completes the country’s biggest investment, amounting to around $20 billion over the past ten years.

South Pars, which is the world’s largest gas field, has some 230 billion barrel of oil equivalent recoverable hydrocarbons. Two-thirds of the field is located in Qatar, and the other third in Iran. At present, Qatar produces more than 590 million cubic meters of natural gas per day from the field and has plans to boost production by 2022. Iran is trying to catch up in production. Iranian authorities have said that by 2018, gas production from the South Pars field (3,700 sq. km) will exceed that of Qatar’s in the North Field (6,000 sq. km), which is the geological continuation of South Pars.

In total, Iran’s gas production has reached 540 million cubic meters, up from just 240 million when Rohani was elected in 2013, according to Iran’s Ministry of Energy.

Production was curbed by sanctions against Iran, which made it impossible for foreign companies to invest in infrastructure to bring the product to market. As a result, most of Iranian gas produced is used for domestic consumption.

Most of the gas produced is used for domestic consumption, and exports are focused on delivering natural gas via already-existing pipelines to Oman, Pakistan, Iraq, and Kuwait. Tehran relies on oil, not natural gas, for main export revenues.

Iran has not yet been able to replicate Qatar’s successful LNG model, due to a lack of investment as a result of sanctions, and now, an over-supplied market. Qatar is currently the world’s LNG exporter, and ships natural gas to both Europe and Asia, where the product fetches higher market prices.