In Russia, It Only Costs $2 to Produce a Barrel of Oil

According to Deputy Energy Minister Kirill Molodstov, the average cost to produce a barrel of Russian oil is $2, possibly the lowest in the world.

“The average production cost for a barrel of Russian oil is about two dollars. The production cost of hard-to-recover and shelf reserves is higher – $20. Indicators also significantly vary depending on the mineral resources development cycle,” the energy minister said in an interview with Rossiyskaya Gazeta.

It doesn’t take a sophisticated analysis to figure out that a $2 production cost is among the world’s cheapest, if not the absolute lowest. The majority of Russia’s oil fields are onshore, which makes drilling, transport, and maintenance inexpensive. The sheer abundance and flow of oil also mean that companies do not need to urgently spend billions on exploring new fields, and the massive pipeline network inherited from the USSR makes transport cheap and simple.

How much it ‘costs’ to produce a barrel of oil is broken down into two main categories – capital expenditures and operational expenditures. Put more simply, how much a company spends on buying fields, exploring them, and setting up rigs and how much it costs to keep those fields and rigs up and running.

At the end of 2015, Gazprom Neft Board Chairman Alexander Dyukov said that the production costs at the company’s mature fields were between $12-15 per barrel. In the Russian oil industry, the capital expenditure cost per barrel in 2015 was between $6-7, and the average operating cost was about $5. Transport per barrel of crude ranged from $4.00-5.10, depending on where the cargo was headed, according to Denis Borisov, director of the EY Moscow Oil and Gas Center.

In February, Rosneft CEO Igor Sechin said that his company has one of the lowest production costs in the world.

Oil companies worldwide boast about how much they can extract for the least amount of money – it pleases both shareholders and investors.

Lower oil prices generally bring down the production costs for companies. In Russia, where the ruble has dropped in tandem with oil prices, this is especially true. With production, labor, and transport costs fixed in rubles and sales in dollars, the oil companies benefit.

Gulf states like Saudi Arabia, Iraq, and Kuwait can keep their production costs under $10 for similar reasons as Russia – an abundance of onshore projects that require little maintenance.

In the UK for example, it costs $52.50 to extract a barrel of oil, and between $30-41 in major producing countries such as the US, Norway, Nigeria, and Canada, according to data by Rystad Energy, an independent oil and gas consulting company with data on 65,000 oil and gas fields worldwide. CNN published a list using Rystad Energy data in November 2015. 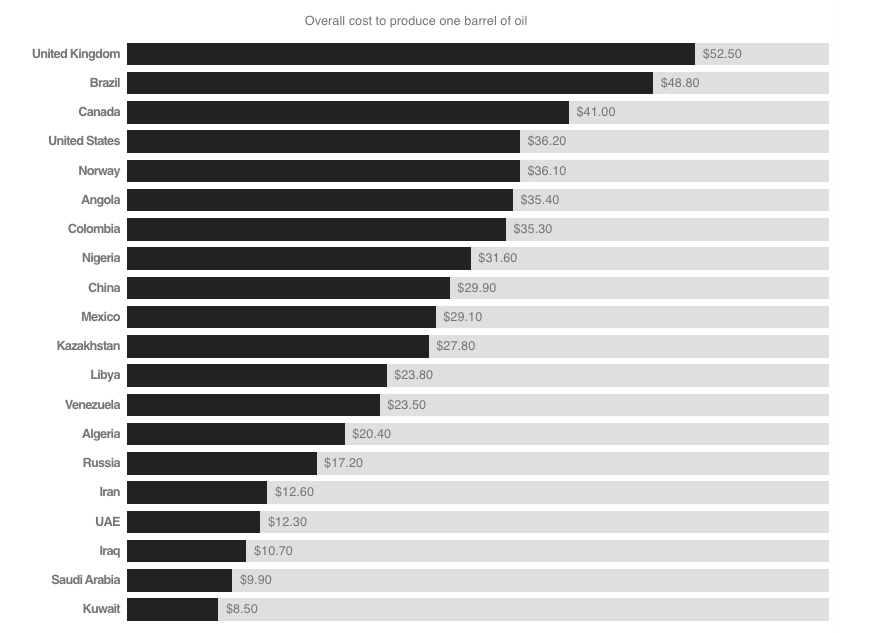 Companies operating in the North Sea can’t justify producing oil when the cost ($52.50) has surpassed the price per barrel, which is currently hovering near $40 per barrel of Brent crude, the European standard.

The most recent drop price in oil prices, credited to the massive supply overhang, has notoriously squeezed out the high-cost shale projects in North America and has made drilling in the Arctic fiscally impossible.