In 2006 it seemed as if Brazil had struck it rich. Tens of billions of recoverable oil reserves were discovered in what is now the lucrative Lula oil field, about 200 kilometers off the coast of Rio de Janeiro.

It was one of the largest oil field discoveries in the Western hemisphere for decades. The untapped hydrocarbon block was named after Brazilian president Luiz Inacio Lula da Silva. Discoveries continued as oil prices began to rise after the 2008-2009 recession. In the last four years, one in every three new oil discoveries was made in Brazil. It seemed like Petrobras, the state-controlled oil company in charge of most of the new projects, couldn’t lose.

Beyond the triumphant oil discoveries lay systemic and insidious corruption, which is only now just coming to light and tarnishing the company’s reputation, not to mention stock valuation.

Petrobras was founded in 1953 by president Getuilo Vargas, and up until recently was a viewed as a national treasure hurling the county’s economy into the 21st century. Vargas famously coined the phrase “petroleum is ours”, meaning the oil belonged to the people, not big energy companies.

President Dilma Rousseff, herself a former energy minister, chaired the board between 2003 and 2010, and now serves as an honorary chair of the board. As chair of the board, many believe Rousseff was aware of the kickback program siphoned billions to executives and political parties third via contracts.

Once seen as a vehicle to bring Brazil out of poverty, now it has been revealed that $1.8 billion in revenue has been pocketed by top execs and politicians and the populaсу turned against Petrobras, but the president herself. Brazilians want her impeached, but her name has been cleared in any wrongdoing related to Petrobras.

While production itself isn’t impressive, the amount of reserves that Brazil sits on is significant and has huge potential for future growth.

Brazil’s oil reserves are estimated at around 14 billion barrels, making it the country with the fifteenth highest reserves. Brazil is the 12th largest oil producer in the world, but its production of oil (2.9%) and gas (0.6%) is minor. For now, they consume more than they produce, which means they still have to import oil from places like the US and Saudi Arabia.

The bulk of oil comes from lucrative offshore deepwater projects like Lula. The Campos and Santos basins, also off the coast of Rio de Janeiro have given Petrobras the assets it needs to attract investment from the likes of Shell and China, which via its development bank, is financing $3.5 billion in loans.

If Petrobras doesn’t manage to turn a profit on the country’s oil riches, somebody else will. Although most investors are pulling out of Brazil due to scandal and distrust, the fragile situation could also provide an opportune time to invest in Latin America’s biggest economy and shiniest energy investment.

Petrobras has said it plans to increase production to 5 million barrels per day by 2018, turning it into an exporter and not an importer. It would be like the US fairy tale shale boom, except now, the buzzword is ‘pre-salt’.

Much of the ‘new’ oil is located more than 2,000 meters below sea level, underneath a thick layer of salt, hence the name pre-salt oil.

Petrobras says pre-salt oil drilling is valuable at $50-52 barrel prices, which means that low oil prices will yield more investment into cheap fossil fuels and further delay renewable energy sources. Production from the pre-salt fields has hit a record 885,000 barrels per day, a more than eightfold increase since wells were opened six years ago. 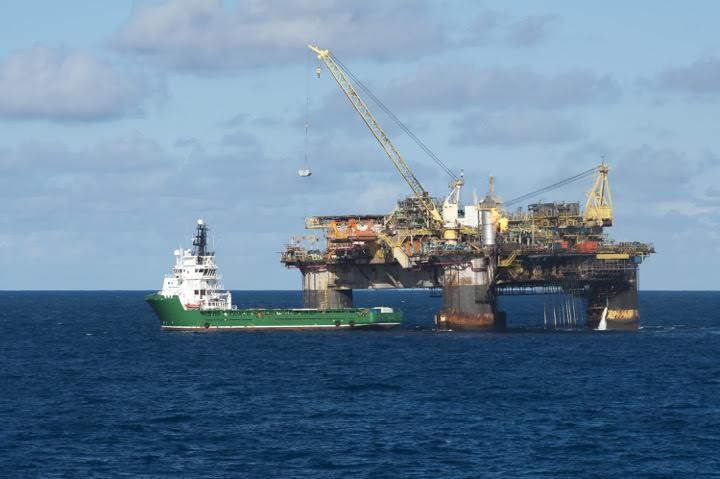 In order to reach the hydrocarbons, Petrobras has had to invest in FPSO, a special type of high-tech floating rig that can cost up to $300 million per unit. By 2018, 40 new FPSOs will be up and operating, according to the Brazilian government. This estimate was made before the Petrobras scandal broke.

The oil rigs aren’t the only projects. The company has been making huge capital-intensive investments and future commitments, like the new Duque de Caxias refinery, or the unfinished Comperj plant, which Reuters reported could result in $14 billion in lost costs. The pipeline headed to the Comperj refinery is now also being reevaluated.

A lot of these projects are becoming less and less viable as the price of oil continues to slide. However, even as oil price drop, petro states like Brazil, Venezuela and Russia continue to pump more in an effort to offset losses.

Billions of state funds have – and continue to be- pumped into the company, while the payoffs are less tangible.

In 2008 at its peak, Petrobras shares were worth $70, making it Brazil’s highest-valued company. Now, the stocks are just barely afloat above $5 per share, a more than 90% percent drop.

It is the world’s third most indebted company and has more than $120 billion in debt. Petrobras is the most indebted oil company worldwide, followed by Mexico’s Pemex and Russia’s Gazprom.

The dirty politics have spilled far beyond the confines of the elite siphoning money from the oil giant. Mismanagement paired with the lowest oil prices since 2009, have meant tens of thousands of energy sector jobs have been cut.

Funds for social programs such as healthcare and education remain empty, while the debt of the state-controlled energy continues to climb.

In a recent August statement, Petrobras announced it will offer $833 million in debentures, a type of debt neither backed nor capital or collateral, on the local debt market.