On September 10-14 representatives from Iran, Iraq, Kuwait, Saudi Arabia, and Venezuela met in Baghdad and established the Organization of the Petroleum Exporting Countries (OPEC).

For the first five years, the group was headquartered in Geneva, Switzerland and then by 1965, it had settled in Vienna, Austria.

In early 1974, without the consent of production companies, some countries decided to play a much more active role in determining the price of oil, abandoning the old pricing scheme that had been used for decades.

Several treaties between nations, as well as oil companies, were broken in order to rival the so-called “Seven Sisters”, the private multinational companies that dominated the oil market. Exxon (Esso), Shell, BP, Gulf, Texaco, Mobil, Socal (Chevron), and now what is France Total, controlled 85 percent of the world’s oil reserves.

The Arab-Israeli war in October 1973 was critical in the rise of OPEC. The cartel, which at the time accounted for about two-thirds of US imports, blocked all shipments Westward. As a result, oil prices increased four-fold, demonstrating just how much power OPEC really held. America literally ran out of gas.

From 1974 to 1982, OPEC more or less took control over global oil prices by setting a fixed price for the benchmark light Arab oil, only changing its price when all member states were in agreement.

The growing importance of influence in global commodities markets, paired with the nationalization of oil assets in most of the member states, absolutely killed the control that international oil companies once held. The Gulf states now had a coordinated monopoly on global energy.

After OPEC flexed its muscles, the West responded by creating the International Energy Agency, now based in Paris, in order to safeguard oil west of the Mesopotamia. The agency was formed on the initiative of former US Secretary of State Henry Kissinger.

Today, OPEC is best known for its quota system- which sets a production limit on member countries in order to maintain influence in the world market.

The quota system was a reaction to the 1979 Iranian Revolution when the rise of Ayatollah Khomeini more than doubled oil prices to $35 per barrel from $14.

The 80s were not nice to OPEC. Between 1982 and 1986, OPEC was forced to play defense while the IEA was diversifying its energy sources and supply chain of petroleum products.

Saudi Arabia, the undisputed unofficial leader of the cartel, decided to play ball. In September 1985, it increased its crude oil production knowing it would further sink oil prices, which remained weak for the better half of the decade.

In 1986, the sudden surge of production in the North Sea and Alaska, coupled with a sluggish global economy caused oil prices to collapse, sunk oil prices. And there wasn’t much OPEC could do about it. 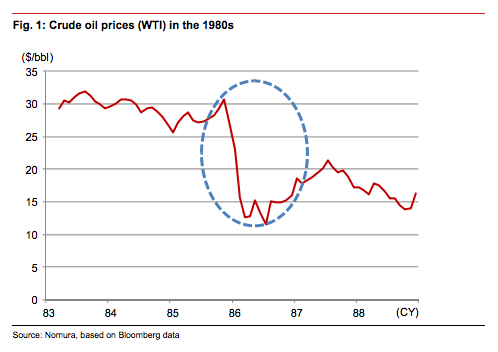 It was time for OPEC to develop a new strategy. On December 19, 1986, it agreed to cut production by 7 percent, limiting daily production to 15.8 million barrels.

Between 1987 and 2005, the organization decided to no longer set oil prices individually, but by taking into account a variety of crude products. This allowed the market to regulate individual grades of oil. A production ceiling was established, and divided among member countries, according to a formula that took into account each country’s oil reserves, production capacity, historical production share, domestic oil consumption, production costs, population, dependence on oil exports, and external debt. The ceiling was set at 17.6 million barrels (2.8 million cubic meters) per day . Currently, OPEC’s quota for oil production is 30 million barrels per day.

The ‘Asian Tiger’ economic crisis in 1998 and the warm European winter both decreased demand for energy. From January 1998 to March 1999, prices only fell $10 per barrel, but the recession was short-lived, and in1999-2000, oil prices again started to rise, in part due to OPEC’s decision to lower production.

As a result, prices gradually increase back to the $35 per barrel level, but signs of slowdown in the US economy in 2000, as well as huge fuel surpluses forced OPEC to set their basket price at $22 per barrel.

Wars in Afghanistan and Iraq damaged the US economy, and the rest of the world wasn’t doing so hot either. Sluggish demand caused prices to crash to $19 per barrel, and by the end of November 2002 they recovered to $20 per barrel.

In July 2008, oil prices reached a record high of $147 per barrel but collapsed after the financial crisis.

As oil prices imploded in the second half of 2014, OPEC sat by and watched as oil prices halved, in theory, to crush the North American shale business.

Now a barrel sells for just above $40 per barrel, due to a slowing China, and economic slowdown in Europe, and a strong dollar.

What happens next rests in the hands of oil ministers from Iran, Iraq, and Saudi Arabia.