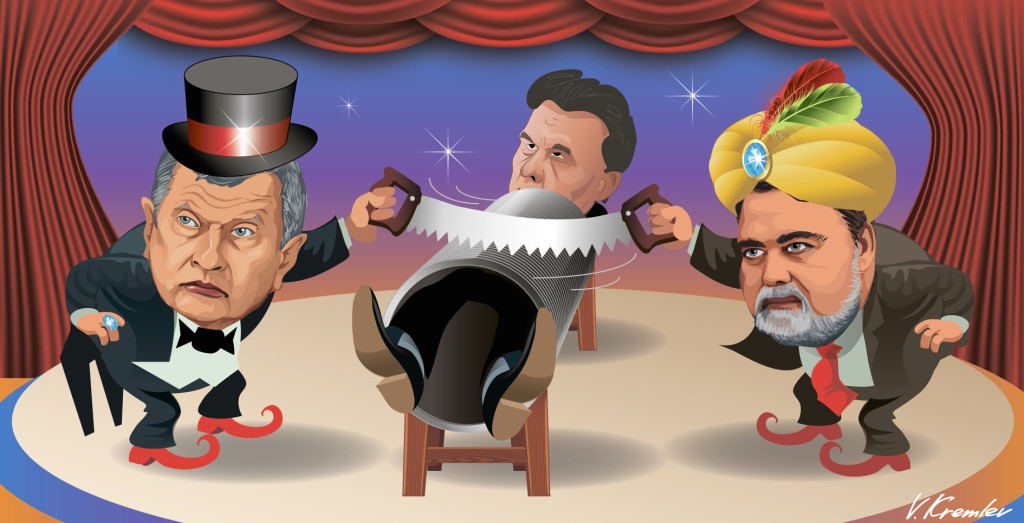 In October, Russian President Putin will have to make a decision on breaking up Gazprom, the country’s largest exporter of natural gas, RBC reported. The company will likely have to give other companies, such as Novatek, Lukoil, Rosneft, and Surgutneftegas access to their pipelines and gas storage facilities.

Russia’s Federal Antimonopoly Service (FAS) has long been working to break up Russia’s “national treasure”, and believes that liberalizing the export market will bring about more fair and competitive gas transport prices and tariffs.

The verdict on whether or not to divy up Russia’s national breadwinner is split. The company, which accounts for 8 percent of Russia’s economy, is seen as a source of pride for many Russians. In 2012, when Russians were asked where they would work if they could choose any large company, 44 percent said Gazprom.

If the company is split, Rosneft is clearly a winner, as it will be able to sink its teeth into the $400 billion gas deal Gazprom sealed with China in May 2015.

According to Golomolzin, discussions are being initiated by Rosneft. If action is taken, Gazprom will also lose its monopoly on gas exports to China, and Rosneft will be allowed to send its oil to China via Gazprom’s pipelines.

Vladimir Blinkov, the lead researcher at the Russian Institute for Strategic Studies, has accused the FAS of ‘anti-Gazpromization’, alleging that the regulator has a conflict of interest in helping Gazprom’s competitors.

The split shouldn’t be a shock to anyone, Gazprom has been under attack since the 1990s. In 2007 then-First Deputy Prime Minister Dmitry Medvedev gave the FMS orders to look at Gazprom. In 2013, Russian President Putin signed into law amendments to the gas export law aimed to break Gazprom’s monopoly on foreign export, particularly LNG.

Even though Gazprom achieved revenues of 4.48 trillion rubles in 2014, is a relic of the Soviet Union and isn’t keeping up with its competitors in profit. While in 2014 Gazprom’s profits reached 157 billion rubles, Surgneftgaz posted 885 billion rubles in profits. Rosneft outpaced Gazprom in profits by hundreds of millions, and Lukoil, the country’s second-largest oil company, topped it by about 24 billion rubles.

Novatek and Rosneft will aggressively take advantage of the liberalized export market and begin the export of liquefied natural gas (LNG), especially to growing Asian markets.

The behemoth has failed to innovate, especially in LNG technology, since a majority of the company’s revenues (50%) are made in pipeline transport of natural gas to Europe, a very lucrative market.

Competitors Novatek and Rosneft are eager to get into the LNG market, and already have plans for LNG facilities. Currently, Russia only has one LNG plant in operation, the Sakhalin-2 project in the Far East, a joint project between Gazprom (50%), Royal Dutch Shell (27.5%), Japan Mitsui (12.5%), and Mitsubishi subsidiary Diamond Gas (10%). Despite falling demand from Asia, the terminal plans to produce 10.8 million tonnes in 2016.

Rosneft plans to launch its own LNG plant on Sakhalin with a 5 million tons per year capacity in 2020. ExxonMobil is a partner.

Novatek’s Yamal LNG project in the Arctic, once finished, will have a 16.5 million tonnes per year capacity. Novatek has partners with France’s Total and China’s CNPC.